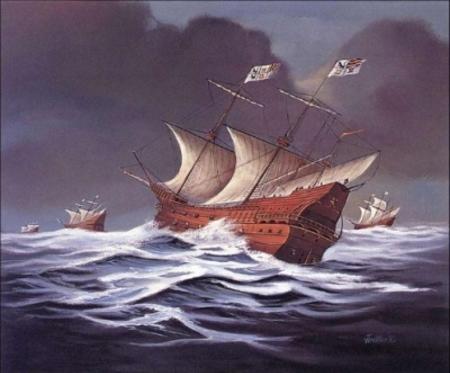 Nuestra Señora de Atocha ("Our Lady of Atocha") was the most famous of a fleet of Spanish ships that sank in 1622 off the Florida Keys while carrying copper, silver, gold, tobacco, gems, jewels and indigo from Spanish ports at Cartagena andPorto Bello in New Granada (current Colombia and Panama, respectively) and Havana bound for Spain. The ship was named for the parish of Atocha in Madrid.  An unfortunate series of complications kept the Atocha in Veracruz before she could rendezvous in Havana with the vessels of the Tierra Firme (Mainland) Fleet. The treasure arriving by mule to Panama City was so immense that summer in 1622 that it took 2 months to record and load the precious cargo on the Atocha.  After still more delays in Havana, what was ultimately a 28-ship convoy did not manage to depart for Spain until 4 September 1622, six weeks behind schedule.

On 6 September, the Atocha was driven by a severe hurricane onto the coral reefs near the Dry Tortugas, about 35 miles (56 kilometers) west of Key West. With her hull badly damaged, the vessel quickly sank, drowning everyone on board except for three sailors and two slaves.  After the surviving ships brought the news of the disaster back to Havana, Spanish authorities dispatched another five ships to salvage the Atocha and the Santa Margarita, which had run aground near where the Atocha sank. The Atocha had sunk in approximately 55 feet of water, making it difficult for divers to retrieve any of the cargo or guns from the ship. A second hurricane in October of that year made attempts at salvage even more difficult by scattering the wreckage of the ship still further.

The Spaniards undertook salvage operations for several years, with the use of Indian slaves, and they recovered nearly half of the registered part of the vast treasure from the holds of the Margarita. The principal method used by the Spanish for the recovery of this cargo was a large brass diving bell with a glass window on one side: a slave would ride to the bottom, recover an item, and return to the surface by being hauled up by the men on deck. It was often lethal, but more or less effective. Dead slaves were recorded as a business expense by the captains of salvage ships.

The loss of the 1622 fleet had an immediate impact on Spain, forcing it to borrow more to finance its role in the Thirty Years' War and to sell several galleons to raise funds. While their efforts over the next 10 years to salvage the Margarita were successful, the Spanish never located the Atocha.

Bartolomé García de Nodal, explorer of the Straits of Magellan surrounding Cape Horn at the southern tip of South America, died on 5 September 1622 in the wreck of the Atocha, 30 leagues from Havana, Cuba.