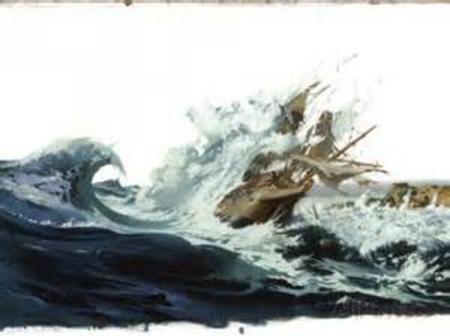 The Concepción was one of the most significant Spanish wrecks of all time, serving the Spanish with a loss of over 100 tons of silver and gold treasure. Thealmiranta of a 21-ship fleet, the Concepción was already in poor repair when the Europe-bound fleet encountered a storm in September, leaving her disabled and navigating under makeshift sails amid disagreement among its pilots about their location. Weeks later, she grounded on a reef in an area now named the Silver Shoals, just to the east of another shoal known as the Abrojos, which the pilots were trying to avoid. After another storm hit the wrecked ship and the admiral and officers left in the ship’s only longboat, the remaining crew resorted to building rafts from the ship’s timbers. Survivors’ accounts pointed to drowning, starvation and even sharks for the loss of around 300 casualties. In the fallout that ensued, none of the survivors could report the wreck’s location with accuracy, so it sat undisturbed until New England’s William Phipps found it in 1687 and brought home tons of silver and some gold, to the delight of his English backers.

The Concepción was found again in 1978 by Burt Webber, Jr., whose divers recovered some 60,000 silver cobs, mostly Mexican 8 and 4 reales but also some Potosí and rare Colombian cobs (including more from the Cartagena mint than had been found on any other shipwreck). Unlike the Maravillas of just 15 years later, however, the Concepción did not give up any gold cobs in our time, and any significant artifacts found were retained by the government of the Dominican Republic, who oversaw the salvage. The bulk of the silver cobs found on the Concepción were heavily promoted, even in department stores! The site is still being worked from time to time with limited success.